ICP–OES is a common technique in analytical chemistry, which is characterized by simplicity, simultaneous multi-elemental determination capability, high sensitivity, linear dynamic range, low detection limits, and good precision [1]. It seems to be the perfect method for element analysis (esp. metals). However, sometimes it can fool the user.

ICP–OES instruments use an inductive–coupled plasma to excite atoms and ions, which subsequently relax and emit light [2]. The result is an atomic spectra of a sample. Atomic spectra are ‘line spectra’, because they consist – in contrast to the typical, continuous band spectra of molecules – of a set of isolated lines [3].

I think that the concept of ‘spectral lines’ is often misunderstood. The very name ‘spectral line’ is a bit misleading and may suggest an (nearly) infinitively thin line at a certain wavelength. This imagination is supported by both the quoted precision of listed wavelengths (3–4 digits, e.g. as in [4]) and the rare specification of the widths of these lines in publications.

It is true that these lines are very narrow (low picometer range). However, they are still peaks possessing a wideness and their profiles have not always a nice, symmetrical Gaussian shape [5]. Nearby peaks can overlap. This leads to spectral interferences [2]. If not aware of this fact the results may fool the user of ICP–OES.

For instant, high calcium concentrations in wine samples will increase the intensity for aluminium by a factor of 8 [6]. For visualization of this example, I plotted below the involved peaks for Al and Ca (all at around 396 nm), using the position and widths from Boumans et al. [5]. 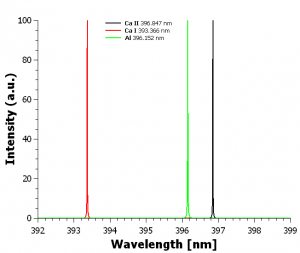 At the first glance, these peaks are very narrow and not overlapping at all. But let us zoom in a little by scaling the y–axis. The result is shown below. 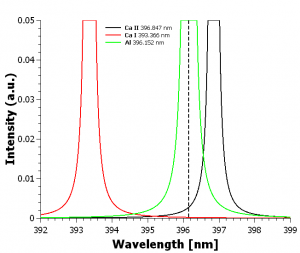 Figure 2. Plot showing a zoomed–in version of Figure 1 with two Ca lines and the Al line around 396 nm. Peak positions and widths were taken from Boumans et al.

As can be seen now, the bases of two peaks, viz. Ca II and Al , are clearly overlapping (also a bit of the other Ca peak is overlapping). The dashed line in this plot marks 396.152 nm, which is the typically line used for Al determination. In this plot (as before) the intensities of all lines are the same and the influence of both Ca lines on the Al line is negligible.

Thus, I assumed that both Ca lines are 300–times more intense than the Al line for this example. Of course, this ratio would only apply if the same amount of element is present in the sample. Typical concentrations of both elements in wine are 70 mg/L (i.e. 1.750 mM) and about 0.9 mg/L (i.e. 0.033 mM) for Ca and Al, respectively [6]. Considering this values, the ratio becomes 15 750! I replotted the peaks using this ratio in the figure below. 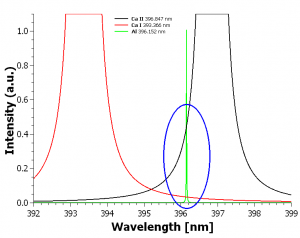 Now, the influence of the Ca lines on the Al line is not negligible anymore. In this case, both Ca lines increase the total signal of Al (at 396.153 nm) by about 48%. If further increasing the Ca concentration, at some point, the overall intensity at the Al line will mainly be defined by the Ca concentration. In the end, this will lead to the previously mentioned factor of 8 [6]. Note that the left Ca line has an non–negligible influence even it is about 3 nm away!

There are more examples for interfering elements, so be aware when using ICP–OES! It will (like every other spectroscopic method) fool every user, who is not aware of possible spectral overlaps. I myself was not aware of this problem since I coincidentally read about it! Now I also demonstrate and teach this to my students.

The good thing is: There are solutions! Of course, the solution depends on the actual analytical problem. One can choose alternative, interference–free lines, use multi–line detection schemes, or (if the source and its influence is fully known!) substract out the influences on the measured signal [2]. Also, spectral overlaps can be minimized (not eliminated!) by using high-resolution spectrometers [2].

2 thoughts on “ICP-OES: Why spectral lines are true peaks and how this can fool the user.”

Sven Kochmann (2014) ICP-OES: Why spectral lines are true peaks and how this can fool the user.. Indianalytics. http://www.indianalytics.de/?p=120