Some time ago, I was looking for a nice, vivid way to describe and present the progress of our projects we do (for a meeting with VIPIs – very important PIs). Usually, when people have to come up with this, they present some numbers – percentages to show the progress. I don’t like this, because of the following reasons:

Let me tell you something about the classical drama, common in France during the 17th-19th century. It consists usually of five acts:

When you read this, does it not come to your mind that every project you did, do, and will do, is actually a drama? Replace hero with researcher, story with hypothesis, character with molecules, and settings with instruments, and so on…

Hence, I decided to use this structure to show the progress of our projects. First, let me rephrase the terms a little bit:

I assigned colors to these acts (or phases as I will call them from now on) and show the progress of projects like this: 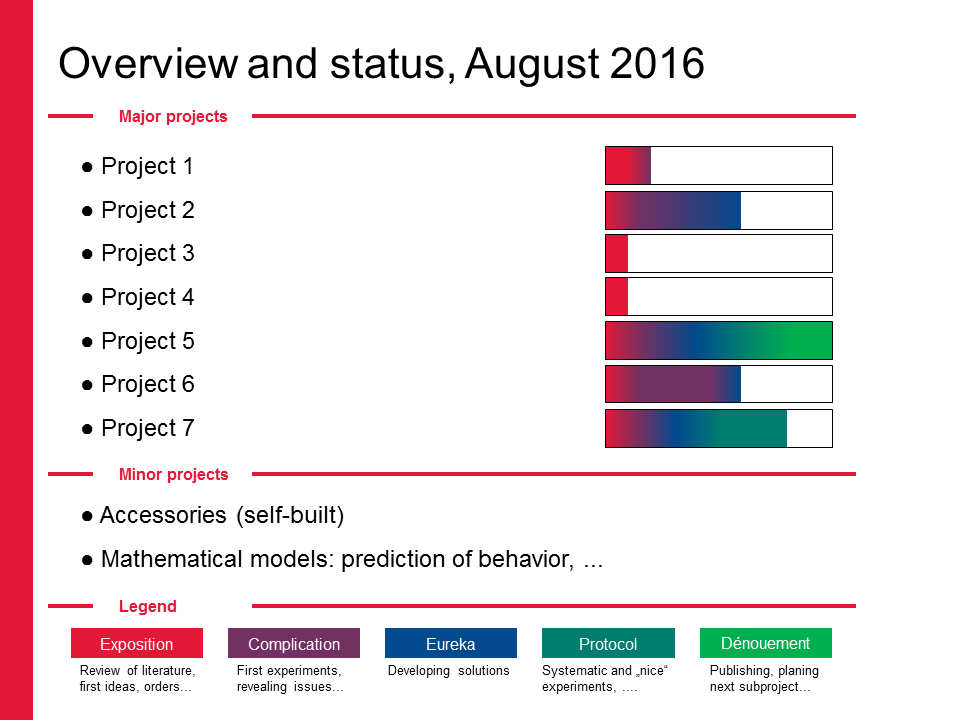 As you can see, I use a gradient between the individual colors to visualize the progress. Project 5 is practically finished (just published the paper for this) – it has the colors of all phases. Project 7 is in the protocol phase. Project 2 and 6 are both in the Eureka phase. However, you might see a little difference in the shading of the gradient. The achievment of a phase is a fluent process. Here, I wanted to express that we already worked a little longer/more in the Eureka phase on Project 2 than on Project 6. Project 3 and 4 have not really been started yet (we practically know only that these projects exists and read a paper or two on them). For Project 1 we just started with the very first experiment.

How to setup the gradient? Well, since we describe here a process that has already taken place, we can simply use the spend time on every phase to balance the gradient. It does not need to be too accurate, though. If you spend a week on the hypothesis and literature, a month for the initial experiments, and now just started the third phase (let’s say for two weeks), then your gradient ratio would be 1:4:2 or 14%:57%:29%. Simple, isn’t it? And no more GUESSING.

I realized, however, that just colors do not work alone – I needed kind of a “progress bar”. The length of the progress bars you see in the above picture represent the progress according to the total phases (i.e. 2 out of 5, 3 out of 5, etc) – wherever I feel it fits better in. This can be seen for Project 1, which just finished phase 1 and already has a slight shade of phase 2. However, the length is still 1 out of 5 (20%).

Note that I also listed some minor projects in the slide, which I did not evaluated in terms of progress. The reason is that these projects are always “present”. We are always working on new mathematical models or little things to improve our daily work.

Sven Kochmann (2016) Describing the progress of projects – a drama in 5 acts. Indianalytics. http://www.indianalytics.de/?p=827